For the last week and a half, I’ve been traveling to the East Coast of US for a hybrid work/holiday trip. Alhamdulillah all went well with the trip despite a 5-hour delay at takeoff (and I mean takeoff – as in, the plane didn’t move for 5.5 hours while we were sitting in the plane) due to a technical glitch. Although we grumbled, most of the passengers were patient and tried to sleep while waiting in our seats, and once we heard there were problems with the refueling tank we even insisted to the cabin crew “No, really, you guys take your time”… Since we missed our connecting flight in Dubai, we took the opportunity to travel around the city on a tour bus – which was great since I had never been to Dubai! I even ran into my best friend from A-Levels, the lovely Andrea, and we screamed and jumped around like crazy Beatles fans.

The work that i had to do was based in Charlottesville, Virginia, a place i (nor my mother, who accompanied me on the trip) had never been to. It’s not exactly the most happening place on earth, but it is a pretty and charming town, with a vast array of lakes, parks and hills to explore if you’re for nature lovers. It was a great experience as I met tons of people from all corners of the globe, and everyone was just so nice and friendly – although it did feel as if you were in a high school reunion where you didn’t know anyone but everyone else did. I also felt like i was in Glee since the high school which we worked in looked just like it – from the lockers to the school cafeteria.

After work, we took the opportunity to travel to NYC, my most favorite city in the world. I know a lot of people who dislike Manhattan and say it’s a dirty and unkept place – which i wouldn’t not agree with – but to me, there is no other place like it in the world. I remember my first trip to NYC as an undergraduate in the summer of 2000 when I went to stay with my aunt, who married a native New Yorker. Coming out of the subway station for the first time, I looked up and was just blown away by the tall and towering concrete jungle above me. As a city girl, and someone who loves people-watching, the city’s energy and vibrancy still does it for me.

We spent three short but fulfilling days there. Our 3-day Manhattan itinerary was as follows:

Arrived at Penn Station from our train ride from Virginia. Checked in our hotel on Lexington Avenue. Walked down Fifth Avenue then turned up towards Times Square. Bought tickets at the discounted booth. Quick dinner from the many halal kebab vans available around each block. Watched Jersey Boys musical on Broadway. Times Square outing to drink in the lights and crazy crowds.

Caught the subway to Port Authority Bus Terminal for our early bus ride to Woodbury Common Premium Outlet in upstate New York. As my friend Farah said, “that place is e-vil!” Seriously did some damage on the wallet with all the crazy 4th of July sales (imagine Coach and Kate Spade handbags at 70% off!!!) Upon arrival back in the city, returned bursting shopping bags to hotel room. Walked to the nearby Grand Central Station, the most beautiful train station i’ve seen, and had dinner at the classic institution Oyster Bar. Times Square again. 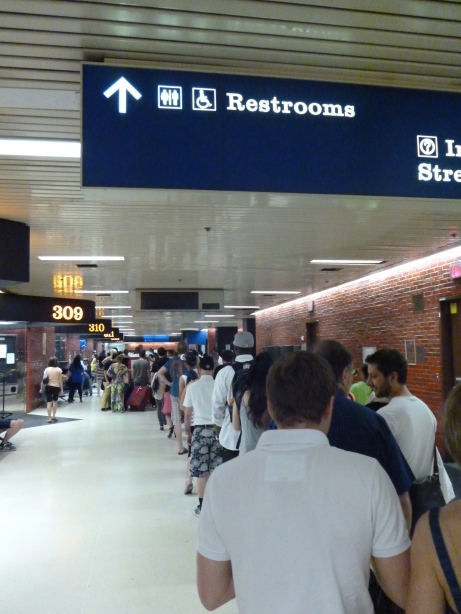 Long queue for the bus to Woodbury!

Breakfast at a cozy cafe across Rockefeller Centre, watching a Today show taping outside the windows. Shopped at NBC store and toured the studios, including SNL, Dr Oz and Jimmy Fallon shows. Walked to Central Park for some greenery and photography. Lunch across the Apple Store on top of Fifth Avenue. Checked out of the hotel, then took the subway and bus to Battery Park for our 2.30pm river sightseeing cruise around Manhattan, including the Statue of Liberty. Took the subway again to Ground Zero and looked at the new WTC construction. Finally, a trip up Empire State Building for breathtaking Manhattan views.

Alhamdulillah, all went well. Insya Allah i’ll be back next year – hopefully with my family in tow, and more time to do research beforehand so i’ll be more prepared!