Our holiday was fantastic and all that we thought it would be. We flew to Sydney, drove up north, stayed in 2 beautiful coastal locations (Port Stephens and Coffs Harbour), and capped the vacation with days in Brisbane and Gold Coast.  And at the beginning of the vacation, I saw Oprah twice! At Melbourne’s Fed Square and Sydney’s Opera House. She rolled down the window and waved in front of me.. at both locations!

Day 1: Landed in Sydney in the morning. Walked around Woolloomooloo (a celeb spot, apparently) and Botanical Gardens to reach the Opera House, only to see everything sealed off for Oprah’s shows. The line of the very lucky viewers was long and they all wore pink bracelets as their tickets. Not to be daunted, I returned in the middle of the evening show with my two sisters in law, Lina and Ira, and we continued to scout for possible Oprah-spotting (or at least hearing) locations. In the end, we managed to get to the side of the concert and hear Nicole, Keith, Russel, Hugh et all sing the Australia song for Oprah at the finale. And when we were at Macquarie Road, we ran between the barricades to catch Oprah’s car and wave back at her! Dinner in King’s Cross, the red light district (because it was the nearest halal outlet near our hotel he he).

Umar taking a nap in front of Sydney Opera House.

Day 2: Explored Sydney on the Hop on Hop off bus. Hafeez and I have used this bus most places where we go if we are short of time (which usually we are) such as in Manhattan, Barcelona, Sydney and Brighton. Especially if we have Umar because kesian dia kena jalan banyak. We went on one round of the bus, got off and had lunch at the fish market, and explored The Rocks. Dinner at halal Msian Chinese restaurant.

Day 3: We started having the rental car from today so was able to hang at Bondi Beach and Paddy’s market. After having lunch (halal kebab at Bondi) we were off to our destination for the night, Port Stephens, a 2.5 hour ride. Checked in to our motel for the night (after having a laugh as the motel had this tiniest swimming pool right at the carpark – why?) and had Italian for dinner by the marina.

Day 4: Port Stephens surprisingly has many things to do! One thing that amazes me about Australia is that at every nook and corner of the country, you are always bound to find something new and interesting to discover. This time it’s no different – the place is apparently famous for dolphin-watching (due to its bay location with a very small opening, which causes more fish to decide to stick around) and white sand dunes (including a Tin City). Mummy and Baba opted for the earlier while we, the kids decided on the latter. And it was a good choice! Being in the middle of a small desert which looms up in the middle of nowhere, and sandboarding down the dune was an awesome experience. In the afternoon we took off to Coffs Harbour – a longer ride (5 hours) this time. 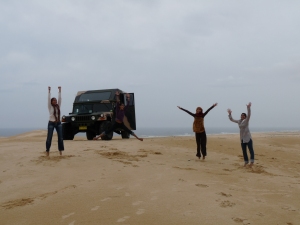 Jumping and sandboarding on the sand dunes of Port Stephens!

During these long car rides and being a family of 8 (6 adults and 2 kids) we had frequent breaks at the Driver Reviver stops – handled by Lion and Rotary Club volunteers who were kind enough to provide free coffee and biscuits. Another example of, as an Ustaz here put it, “seeing Islam in the West“.  The slogan was catchy too: “Rest, revive, survive”. Indian for dinner.

Day 5: Left Coffs Harbour in the morning – despite it being a more happening place than Port Stephens, we opted to go early as we had another long ride ahead of us. Stopped for lunch at the famous Byron Bay which is reminiscent to Bali in its trendy and happening shops and surfer-dude atmosphere. Arrived in Brisbane early and checked into Oxygen Apartments, Leen’s former apartment block which she had kindly offered to us (before she was prematurely ordered by her company to move to Perth, leaving us with the still-fair corporate rate). Had Malaysian food for dinner which was great although the debate over whether Ira’s dish was really kung po chicken remains unresolved.

Day 6: Explored Brisbane by car and foot over Southbank and Queen St Mall and managed to have a good time despite the pouring rain. Was able to pick up some things at Southbank, hop into visitor centre for Gold Coast information, down hot chocolate (though not as delicious as Chocolait in Melbourne!) at Max Brenners, chomp over Nando’s chicken and lose a few hours shopping and having tea in the CBD.

Day 7: After buying DreamWorld tickets at Southbank (we decided on only one theme park as only 2 among us were crazy for the thrill rides and it was more family-friendly), we spent the day shopping in Harbourtown Gold Coast and beach-grazing at Surfers’ Paradise. Umar loved the beach, as usual, and I had to change him into his newly-purchased Cotton On tee after his clothes got wet running in and out of the water. Indian for dinner.

Day 8: Dreamworld! As designed, it gave us plenty of happy hours watching tigers and wombats, driving vintage cars and the only motorcycle rollercoaster ride in the world, and going up and down family fun rides. Dinner was a bit of a disaster as the Chinese restaurant Hafeez and I picked were at such a good people-watching location that we were not served until more than 1 hour later! Nasib baik makanan sedap.

Day 9: Last-minute exploring of Brisbane city through the river cruise (pancakes and skinny latte on board – delicious!) and driving up the Mount Coot-tha for (invisible due to the rain and fog) city views. Boarded the night flight and was back at our cramped Glenroy one-bedder before we knew it.

Later in the week we again (much to the men’s dismay) went shopping at DFO Essendon and Harbourtown Docklands, before celebrating Baba’s 59th birthday at a seafood restaurant in gorgeous Williamstown. After the girls left for home, we again went for a weekend break in Mount Dandenong at a beautiful B&B. Yesterday before coming back we went for a stroll in the gardens, picked cherries in the farm (A$7 per person!!) and downed Devonshire tea at the one of the local tea houses. 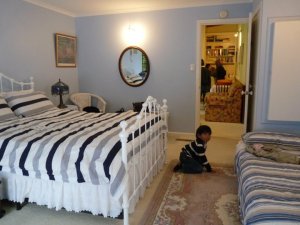 All in all, a very happy and enjoyable vacation. Thanks to my wonderful family in law for planning the trip and for their very-much missed company.

For now it’s back to work – but I’m already dreaming of the next holiday in May when Ibu et all finally comes over!